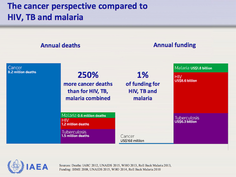 Why We Chose to get involved in the fight against Cancer?

​Nearly 8 million people die each year Cancer across the world, i.e. more than of Aids, Tuberculosis and Malaria put together.Even though funds set aside to fight Cancer are growing year on year, this is, unfortunately, still too little to face the reality of the situation.

Figures are as follows:

… and a mere 168 million dollars raised for the fight against Cancer!

More than just raising funds, it is also important for each of us to become conscious of this terrible affliction.

It is also your responsibility to inform, educate and make aware the people closest to you .

Early screening Cancer programmes can save lives; discuss it with the women you love!

For more information on “Alice House”, the first living space in Africa which will open its doors mid-2016 to patients and their families afflicted by this disease, go to http://goo.gl/lFbu8P